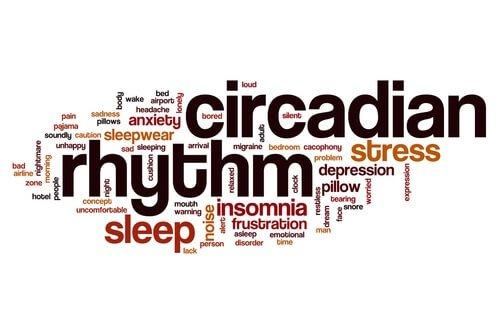 As the sun starts to set and your day comes to a close, you begin to feel tired. After a few hours, you’re ready to go to bed, and you sleep through the night until morning.

At least, this is the typical sleep-wake pattern for most people. For people with circadian rhythm sleep disorders, however, the daily cycle of wakefulness and tiredness may be very different.

In this article, we’ll explore the topic of circadian rhythm sleep disorders, providing an overview of what they are how they are related to other sleep disorders. We’ll also provide information about diagnosis and treatment options for each of these disorders.

What is a Circadian Rhythm Sleep Disorder?

Your internal biological clock regulates your periods of tiredness and wakefulness over the course of a 24-hour period and is calibrated by the rising and setting of the sun.

The function of your circadian rhythm is controlled by the hypothalamus region of the brain, or more specifically by a group of cells called the suprachiasmatic nucleus (SCN) which is linked to the optic nerves that sense changes in daylight.

The SCN is thus also responsible for regulating the other bodily functions that are connected to a 24-hour cycle such as heart rate, body temperature, blood pressure, and the release of the hormone melatonin. In the afternoon and evening, melatonin levels start to rise, making you sleepy then taper off in the morning which is what causes you to wake.

For most people, the biological clock is set to make you ready for sleep around 11pm and to wake around 7pm. Everyone’s circadian rhythm is a little different, however, and it can be impacted by your work schedule as well as other factors. When these patterns become disrupted, it results in a circadian rhythm sleep disorder.

Intrinsic circadian rhythm sleep disorders are disorders in which your body clock is significantly different from the rest of society.

You might go to bed and wake up much later than usual or much earlier than usual – you might also experience fragmented sleep or a sleep pattern that changes frequently.

Here are the 6 most common circadian rhythm sleep disorders:

Delayed sleep phase syndrome is characterized by a delay in melatonin production. People with DSPS don’t feel tired until about 2 hours later than most people, though they still require the same 7 to 9 hours of sleep.

Because melatonin production is normal but delayed, they may sleep later in addition to staying up later. When this cycle doesn’t line up with work or school, it can cause problems.

Non-24-hour sleep-wake syndrome is also known as free running disorder and occurs when the circadian rhythm is out of sync, having a slightly longer than 24-hour cycle.

This causes the patient to get sleepy later and later every few days, causing the internal clock to shift.

Irregular sleep-wake rhythm is another problem with the circadian rhythm being out of sync, but it usually causes the person to sleep in several short periods of sleep or “naps” over a 24-hour cycle instead of one long period of sleep.

Shift-work sleep disorder happens when a person’s circadian rhythm conflicts with their school or work schedule, causing them to experience daytime sleepiness and/or insomnia. People who work early morning shifts or night shifts can generally adjust as long as the schedule is regular, but people with rotating shifts have a harder time.

Jet lag happens when you travel quickly into a new time zone (generally by plane), so your body has to adjust to a new sleep-wake cycle that might be off from your normal circadian rhythm.

What Are the Symptoms and Causes of Circadian Rhythm Sleep Disorders?

Generally speaking, circadian rhythm sleep disorders are characterized by a disruption in the typical sleep-wake cycle or circadian rhythm. There are six different types of disorder, each with its own unique set of symptoms. Here is an overview of the symptoms associated with each of these disorders:

This is a circadian rhythm disorder in which the patient’s sleep-wake pattern is delayed by two or more hours then what is desired or socially acceptable. People with this disorder tend to prefer later bedtimes and wake-up times, though once they fall asleep, they usually get a normal amount.

Symptoms of delayed sleep phase syndrome may include the following:

In many cases, the cause of delayed sleep phase syndrome is another sleep disorder, a medical condition, a mental health disorder, or related to the use of medication or substances. This disorder is most common in teenagers and usually develops during the early teenage years and lasts into the mid-twenties. In fact, this disorder is so common in teenagers that there is some progress being made in changing school start times.

This is a circadian rhythm disorder in which the patient’s sleep-wake pattern is advanced by 2 or more hours. In other words, they start to feel sleepy earlier than is typical and thus go to bed earlier, waking earlier in the morning as well.

Symptoms of advanced sleep phase syndrome may include the following:

This circadian rhythm disorder is not very common but is usually seen in middle-aged adults and seniors. There is thought to be a genetic link, as it appears to run in families, and it may be linked to another sleep disorder, a medical condition, a mental health disorder, or related to the use of medication or substances. It affects men and women at an equal rate.

People with non-24-hour sleep-wake syndrome may sleep for a normal period of time every day, but their sleep-wake cycle shifts a little later each day. Because the sleep-wake cycle is changing from day to day, this condition is easily confused with other circadian rhythm disorders. It is particularly common in blind people because light is the biggest influence on resetting the brain’s biological clock.

Symptoms of non-24-hour sleep-wake syndrome may include the following:

More than half of blind people have this disorder, though those who still have a working pathway to the part of the brain that controls the internal clock do not. Though this condition is rare in people who are not blind, contributing factors may include limited exposure to daylight, concurrent psychiatric or personality disorders, and neurological conditions.

People with this circadian rhythm disorder has a sleep pattern that doesn’t follow the typical sleep-wake rhythm of sleeping for one extended period at night and staying awake for an extended period of time during the day. Instead, these people tend to sleep in several shorter periods of time (naps) dispersed over a 24-hour period. Though they may only sleep for 2 to 4 hours at a time, the total amount of sleep they get in any 24-hour period is normal and adequate.

Symptoms of irregular sleep-wake syndrome may include the following:

Irregular sleep-wake rhythm disorder is very rare, so its prevalence is unknown. It seems to be most common in people who have neurological conditions such as dementia or mental retardation and in people who live in institutions where exposure to natural daylight and structured daily activity is low.

This is a circadian rhythm disorder in which a person’s sleep-wake cycle conflicts with their work schedule. People with this disorder often experience insomnia or excessive daytime sleepiness because their circadian rhythm is out of sync. Shift-work is considered hours worked outside the traditional 9-to-5 schedule and often consists of early morning or night hours as well as a rotating schedule.

Symptoms of shift-work sleep disorder may include the following:

Having shift-work disorder can increase your risk for injury on the job or while driving. It leads to the increased use of sick time as well as an increased risk of substance abuse in people who use drugs or alcohol to obtain sleep. Long-term health risks include heart disease, obesity, cancer, and infections.

This disorder occurs when you travel across multiple time zones (at least two), and you have trouble adjusting your sleep-wake cycle to the new schedule. When you travel quickly by air, your body will most likely still be aligned with your typical circadian rhythm, and it could take several days to adjust to the new one. As such, jet lag is a temporary condition.

Symptoms of jet lag may include the following:

Jet lag can be worsened by sleep loss caused by travel as well as spending extended time in an uncomfortable position, such as an airplane, especially for sleeping. Stress, excessive caffeine or alcohol use, and poor air quality can also contribute.

If you have trouble sticking to a regular sleep schedule or you find that you have trouble falling or staying asleep, you may want to talk to your doctor. You should also consult your physician if you experience excessive daytime sleepiness or other symptoms. If you’re concerned that you might have a circadian rhythm sleep disorder, your doctor will be able to help you identify which disorder it is and recommend a course of treatment.

Here are some of the things you may undergo in diagnosing a circadian rhythm sleep disorder:

In addition to diagnosing you with the proper circadian rhythm sleep disorder, your doctor may also want to identify any triggers that could be contributing your symptoms. Things such as chronic stress, sleep deprivation, and changing work schedules can all be a factor in the development of sleep disorders. It could also be related to your drug use, alcohol consumption, or use of medications.

What Are the Treatment Options for Circadian Rhythm Sleep Disorders?

When it comes to the treatment of circadian rhythm sleep disorders, your options are determined by the type of disorder and the degree to which its symptoms impact your daily life. In some cases, treatment may not be necessary at all. For example, if you have delayed sleep phase syndrome, but you don’t actually need to be awake early in the morning, you may simply be able to adjust your sleep schedule to accommodate for the condition.

In other cases where your symptoms impact your life, you may want to consider treatment options such as the following:

Behavior therapy can take many different forms. For the treatment of circadian rhythm sleep disorders, it often involves making changes to your lifestyle and sleep habits to accommodate your disorder. For example, you might work with a therapist to establish and maintain a regular sleep-wake schedule while including things such as exercise, regular meals, and social interaction. You may also need to avoid daytime naps, caffeine in the evening, and bright light at night.

Bright light therapy is a treatment that can be used to reset your circadian rhythm. All that is required is a high-intensity light (about 10,000 lux) and an exposure time of 1 to 2 hours. Timing is important, so only use this therapy under the guidance of a sleep specialist.

When behavior therapy and light therapy don’t work, you might consider medications or chronotherapy.

Chronotherapy is simply the progressive delay or advancement of sleep time by about 1 to 2 hours per day.

The timing is determined by the type and severity of your disorder as well as your daily obligations. Medications like melatonin can help you fall asleep outside of your circadian rhythm, and wakefulness-promoting agents can help you feel alert when you wake up earlier than usual.

Sleep is an essential part of life but, for some people, it doesn’t come so easily.

If you suffer from a circadian rhythm sleep disorder, you may struggle to work your sleep schedule around your work or school obligations. If you’re having trouble, talk to your doctor about the treatment options discussed above to see whether one of them might be right for you.